There has been a very high demand for Esterbrook’s Radio Pen 914 lately.  It is not owing to its calligraphic prowess, though it does possess such qualities. It is not because it is silver and pretty to look at.  It is in high demand because of its endearing association to a very skilled comic artist by the name of Charles Schultz (may he rest in peace.) It is now widely known that Charles Schultz used one exclusive pen point to ink his comic strip “Peanuts.” He has been quoted as stating that he would stop drawing the comic if he ever ran out of Esterbrook’s 914 Radio Pen. When Esterbrook decided to cease manufacturing of the Radio Pen 914*, Charles bought every last box in the warehouse. Due to that act, there are very few available boxes of Esterbrook Radio Pen 914 out there for grabs. This makes the pen especially rare on top of having a very special connection. It’s no surprise that with the release of the new Peanuts movie, that demand for this pen has risen and so has the cost for this pen.

Now, what I want to do is set the record straight for people who REALLY want this pen.  If you want it because of its connection and you have no intention of using it, then you will need to find just any Esterbrook Radio Pen 914 you can. For those of you who wish to follow in Charles’s footsteps…you need to continue with this discussion. 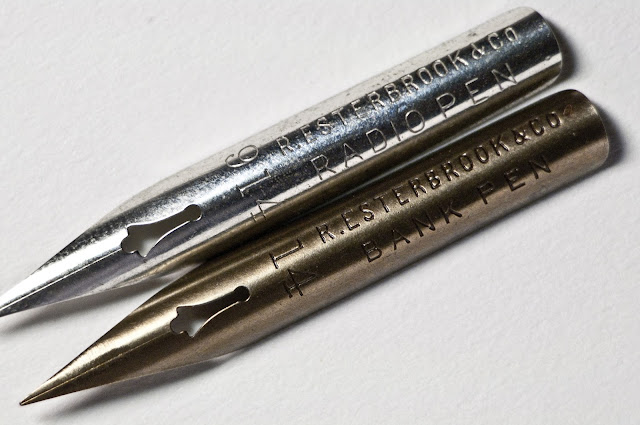 First, let’s get one thing out of the way. The Esterbrook Radio Pen 914 is 100% identical in shape and design as Esterbrook #14 Bank Pen. Look at the picture above. It is in fact meant to be the same pen, except one is plated and the other is not. Therefore, focusing on the #914 solely because it is felt that it will render the cartoon style better is a fallacy. The #14 Bank Pen will do exactly the same strokes, line widths, and control factors as the #914. In fact, the number “914” is just adding a “9” to the “14.” That’s how Esterbrook came up with the numbers on the Radio Pens. It simply added the number “9.” The plating was used to reduce the wear and tear on the pen as well as resist oxidation and acidic deterioration. With today’s drawing inks, they are so AP non-toxic and safe, that you won’t need to worry about that as much.

With that said, if you can’t find a 914, don’t fret!  There are PLENTY of Bank Pen #14s out there to be had and for A LOT cheaper (for now anyway.) Now that we have that out of the way, let’s explore a few differences that you may need to be concerned with.  The Bank Pen had under gone quite a few design changes that affect its performance. 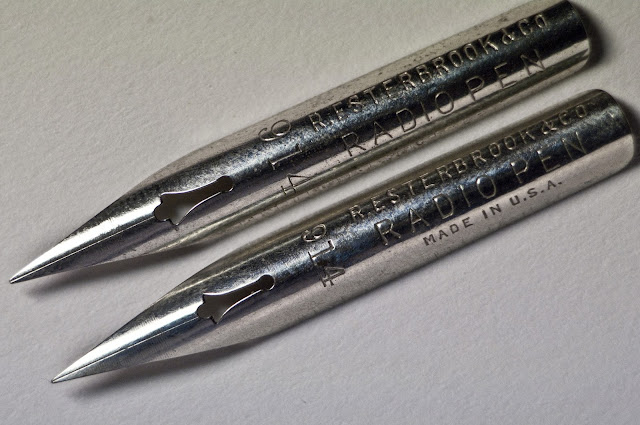 1) The pen from 1926 is made from steel imported from England and is plated first with copper, then with a nickel silver alloy called “Radio Plating.” The pen from 1946 is after WWII and was not able to use nickel, silver, or copper. The steel is American steel and the plating is a form of chrome made from iridium.

This is what a small - medium grind looks like.

3) The gravity wells between these two pens are different. The version on the 1926 pen is wider. This means more ink volume being fed down the pen and a bit more flexibility. The 1946 version is thinner with more angle on the wings that flare to the sides.  This keeps tighter control on volume and slight stiffness (Think of it this way: More metal, less flexible. Less metal, more flexible).

These three differences will come into play on how long the pen lasts and how it will ink when you use it. For those who’ve followed Peanuts from back in his earliest days will note the vast changes in art style. Some of this has to do with the changing times, age, ink, and of course…pens. Let’s explore those changes further. 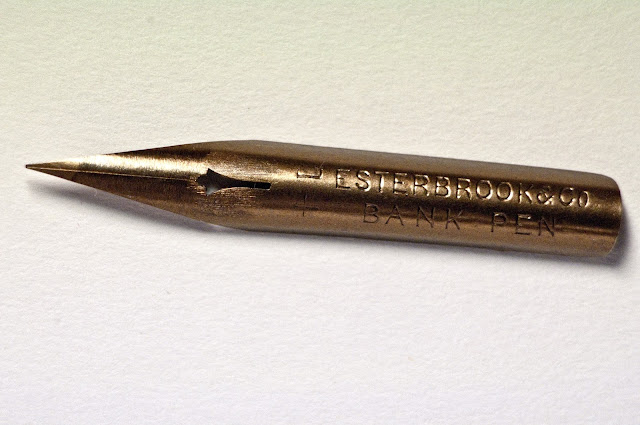 This is oldest Bank Pen I have seen.  It is from 1876.  Straight away you can see that it is very different. The point has a double-grind. Meaning that it has a grind that goes in two different directions. The gravity well looks very different, it’s smaller and narrower. It is doubtful that Charles Schultz ever used this style of pen. So if you get a hold of these very old style Bank Pens, they will not function the same as his did. Keep that in mind as well when you are out searching. 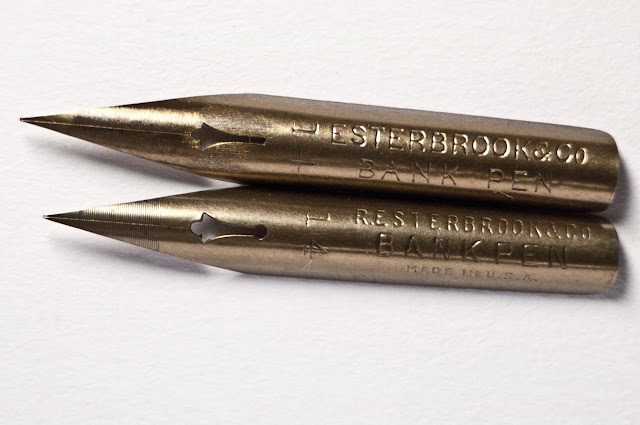 Here is what a modern #14 Bank Pen from 1946 looks like in comparison to the 1876 version. You can see the older version is longer than the newer version. That will directly affect performance because for the older version it will require more downward force to spread the twines. Also, the point is finer on the older one.  So the strokes will be thinner and because the gravity well is so small, you won’t get as much ink volume as you will on the newer model. The newer model is most likely the exact pen type Charles Schultz would have been using towards the end of his life and during the last remaining years of the comic strip Peanuts.

Above is a progression of gravity well changes from 1876 – 1946. As you can see they are very different. As previously mentioned the shape and size affect flexibility and ink volume/flow. You can also see in the last two that even though the size is different between the gravity wells, as previously discussed, they are basically the same design.  This is important because Charles would have been using pens with this design versus the design on the older ones. 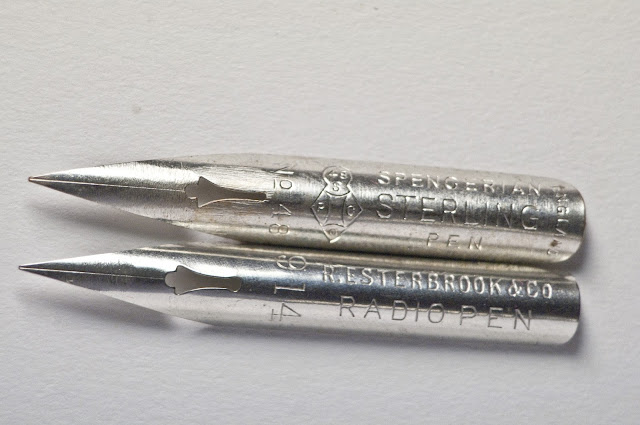 Esterbrook had few competitors, but the two primary ones they had were Spencerian Pen Co and Hunt Pen Co.  Pictured above is a comparison of the Spencerian #48 Sterling versus the Esterbrook #914 Radio Pen. What’s interesting here is that the Spencerian pen has taken on a combination of the old style bank pens but it is shorter; the same length as the Radio Pen.  It’s also a bit wider. You can also see that Spencerian used a higher grade of silver in its plating than Esterbrook. Also, the Spencerian uses high carbon steel for its core. In my tests, I have found the Spencerian to outperform the Esterbrook in every category. I am willing to place bets that if Charles were alive and someone gifted him this pen…he’d switch!  No, I am not joking; it’s that much better! Sadly, these aren’t that easy find either and it isn’t due to popularity.  There simply weren’t that many imported from England.  However, I have some available in my shop: https://www.etsy.com/listing/256755935/vintage-spencerian-48-sterling-pen?ref=shop_home_active_2 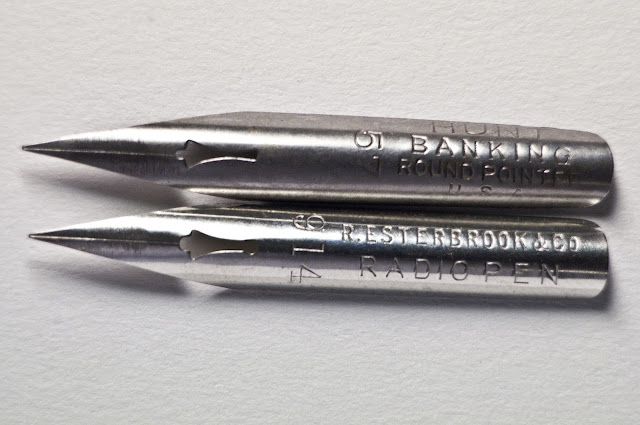 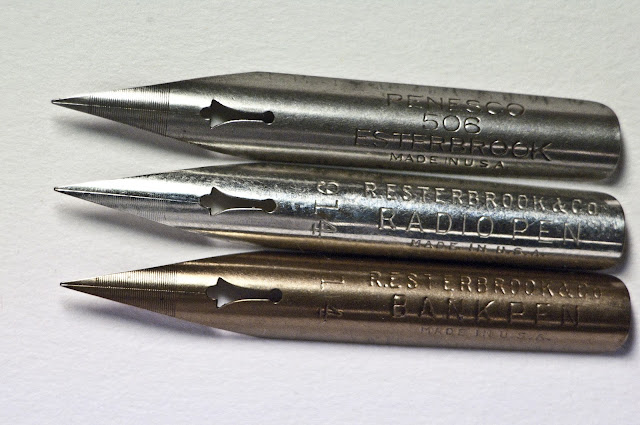 Above is a comparison that shows yet another Bank Pen clone called the #506 Penesco from Esterbrook. The Penesco pen line used slightly less quality of steel than their regular line, and also didn’t have such qualities as coloring. The gravity well on this pen is not just thinner, it is also shorter, which directly affects the flow of ink. I doubt Charles would have used this particular version of the pen either.

Lastly, I would like to state that we don’t know Charles Schultz’s rate of pen consumption. We don’t know how far back he hoarded these pens. What I can say is that I have not yet seen a full box from 1944 – 1952 and those are the boxes that Esterbrook would have had in their warehouse when he cleaned them out.  In conclusion, if you want to learn to draw cartoons as Charles Schultz did, you will need to find Bank Pens that have the design factors starting from the mid-1920s all the way to 1947.

*Author's Note: Some have been posting that Charles Schultz purchased his massive lot from Esterbrook in the 1970s.  That is not true. Esterbrook ceased ALL dip pen production in 1952.  So that is likely the year he did it.
Posted by Brandon McKinney at 7:51 PM